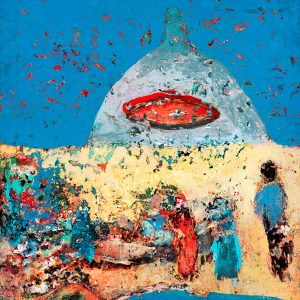 This print  series was shortlisted for the “Riseart Art Prize 2018”, an online gallery based in the U.K. ( www.riseart.com )

The images in this print series originate from hand-sized, metal paint scrapers I used in my studio to apply paint to canvas during the creation of a body of large abstracts. After months of smearing, scraping and mark-making, the build-up of multiple layers of paint on these metal tools, began to look like miniature abstract paintings.

The process of ‘subtraction’ began I when started carving into the layers of dried paint; removing fragments of the upper layers and inviting previously ‘hidden realities’ to present themselves. Surreal landscapes materialized, with animated figures and amorphous shapes appearing to emerge from the cracks and the smears of layered paint.

The ‘subtraction process’ continued when additional paint was added, which I then partially removed, before the medium had completely dried, creating an additional layer and adding to the visual complexity of the work. The original paintings were then scanned and converted into a limited edition print series. 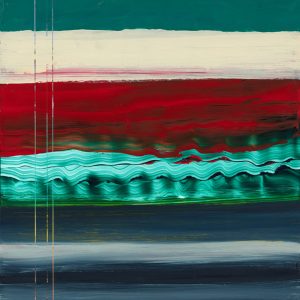 This series of  prints reflects my interest in the shifting relationship between shapes, colours and textures. The images began as  small paintings, using oil paint on aluminum….something I had never attempted before. The content of these artworks are purely colour and form and do not represent anything to do with objective reality.